Over half of the art may have been guaranteed to sell before this year’s Baran Handwriting Impression & Calligraphy Auction even got underway in Tehran on Friday, 22 February. But the auction, no doubt, set a new record for a single sale, selling 11,769,000,000 billion tomans of art.

That mind-blowing sell eclipsed the previous record that it set during the second big contemporary auction by Baran last year. An encouraging part of what was obviously a very managed sale was that this happened at a time when Iran is under Washington’s unilateral sanctions and economic hardship, as well as the fact that 46 artists set new national auction records. Of course, these were not the usual suspects like Hossein Zenderoudi or Sohrab Sepehri, although these auction house darlings all featured among the 10 most expensive lots at last year’s Tehran Auction.

Instead, an engraved Holy Quran was the top lot of the Friday night, selling for 7.7 billion tomans.

At least 13 lots set new national records for other artists, including Mir Emad Hassani. The event, organized by Baran’s founder Mahboubeh Kazemi Doulabi, sold 46 lots and some of art for sale certainly generated huge returns for the sellers:

t goes without saying that 19 lots didn’t sell at this year’s event. True, the link between price and value is hard to nail down anywhere in the

art world, but not at this very top end of the contemporary market at Baran’s third auction. At any rate, ultra-rich buyers were prepared to support them in these hard economic times. 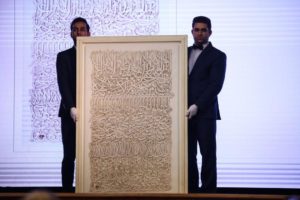